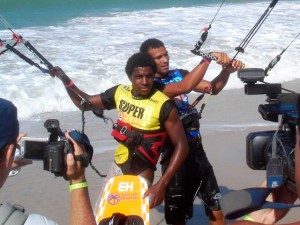 1999
I started flying kites when I was 7. I used to go to kitebeach, Cabarete with my friends and be excited about the colorful and the amount of kites that suddenly had filled up my backyard skies.I had always dreamed about flying a kite and in matter of months I had a 4.5M C-shaped kite of my own. My first board was hand-made in Cabarete and it was a 118X120CM.

2000
I started kitesurfing in the year 2000 and in less than 2 months I was already jumping and doing small tricks. Many people saw my talent and always encouraged me to keep going. A local kite designer/manufacturer started noticing and provided me with gear.When I was 9 my skills had blown up to the sky,literally. I was flying all over kitebeach and it was really fun. Many observers also had lots of fun watching me and some of them continue to support me greatly today.

2003/2004
I started competing in a 2003/2004 Dominican national championship competition at Cabarete with and against all my friends and gained a lot of experience and learned how to keep myself focused in the task at hand.

2005
Then, I competed in the 2005 PKRA event held in Cabarete. I was already doing many tricks and had gained experience and my gear was brand-new,but I wasn`t able to go past the first heat again…That didn`t go well with myself and I couldn`t blame anybody but me. So I started training harder and focused on competing in the few local challenges that we held ourselves at Kitebeach,Cabarete and won many of them by gauging the applause of the present crowd, that was always enthusiastic and very attentive. Cabarete was in the middle of the kiteboarding boom.

2006/2007
Then I went to compete in the 2006 PKRA event and placed 9th in the general clasification. For many people that was good, for myself it wasn`t. I was in a mission and in the 2007 PKRA event I won the whole thing,The freestyle Kiteboarding Champion in my own beach!… and became the first rider ever to win with a bow-shaped kite. I shocked the world, but not myself. I knew I was getting that prize, even though I was only 15. That same year I went to Brazil, my first travel overseas representing my country. That was a big challenge for me as I had never being out of my hometown of Cabarete before in my entire life. I was the undisputed Champion in Brazil as well and it was a thrill to wave my flag in front of so many people. I was in tears and very happy with the memory of so many close friends,family and sponsors that always believed in me since I was a child. From there I went to the 2007 KPWT event in a nearby beach in Brazil,and lo and behold I won the competition in a very remarkable fashion. I was certainly on a roll now and getting noticed by the kiteboarding world quickly.From there I came back to Cabarete and was received as a hero.

2008
In 2008 I went to compete to the KPWT event in Leucate, France. It was really cold and I was a strange to the environment, which I noticed to be very harsh. I went out and totally dominated the field winning first place,again. From there I went back to Brazil to defend my title and placed 7TH in the Freestyle and won the Best-Trick competition. Then I went to the 2008 KPWT event held at Brasil and placed 4Th in the Freestyle.
I started riding OZONE kites and it was a whole new experience for me. I felt more appreciated and also I developed a feeling for this kite that I hadn`t been able to do with the ones before.

2009
I competed in the 2009 Master of the Ocean and placed 2nd in the Freestyle and regained my bravado and confidence. Then I competed in the 2009 PKRA at Fuerteventura. I was still getting familiar with my new gear. From there I went to the 2009 PKRA at Germany and was amazed by the vast field of experienced riders. I placed 6th in that competition and started my quest to go back to the top with my new OZONE gear.

2010
2010 has been really good and exciting so far. I placed 5th in PKRA Leucate,France. Then came back home to Cabarete and won the 1st place in the PKRA event held here, again. Morocco was the next stop in the PKRA tour and I placed 7th. Then I went to PKRA-Germany and finished 5th. Fuerteventura,Spain was next and I won5th there as well. My last competition this year was at PKRA-Tenerife, Spain and I was able to come in 4th. After all the races I`m currently ranked 5th in the world and if I continue participating in the other stops of the tour I`m sure I can place myself in the podium and be among the three best kiteboarders in the world. All this information can be confirmed by searching my name in the kiteboarding governing boy at www.prokitetour.com and contacting the organizers of each country stop of the PKRA world championchip world tour.Currently I`m training hard in Cabarete and will be participating in contests around the world in a more regular manner so that I can gather points and become the next Kiteboarding Champion of the World. 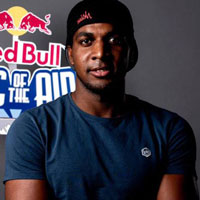